It seems that every year I have to run after some clients to remind them to pay their quarterly tax estimates.  Estimates are a requirement of law.  Basically the government wants your taxes to be PAID IN ADVANCE of the yearly tax bill.  How is that fair?

Like many things in life, it is not fair; it is just the law.  Both businesses and individuals are required to pay taxes in quarterly installments throughout the year in anticipation of the yearend bill which is effectively due for most individuals on April 15th.

One problem with estimates is that the due dates are remarkably useless.  Instead of paying estimates at the end of each calendar quarter [which makes logical sense] our government has made the estimate due dates are the 15th of April, June, September and January.  This creates unique timing problems in that April 15 is also the due date of the prior year’s taxes in addition to the first estimated tax due date on earnings for the first 3 months of the current year.  The June 15thdate, means that if you use the calculation method calculate taxes on April and May monthly earnings; the September 15th estimate is for earnings in the moths of June, July & August; the last estimate technically due January 15th after yearend is for the 4 months of earnings September, October, November & December.  So clearly, the equal estimates are hardly equal in every way; they represent different numbers of months.

Estimate calculations have two categories that you should be aware of.  The first calculation is called a protective estimate.  A protective estimate is 110% of last year’s tax.  This is the safety type estimate, in that, no matter how much taxes you owe or don’t owe at yearend, if you prepaid a total of 110% of last year’s tax bill you by-pass the possibility of penalties and interest, as long as you pay any remaining personal balance by 4/15 of the following year.  For businesses it is the same, except for the fact business tax returns are due 3/15 which is the business deadline for settling your business tax bill with the government.  And by government I mean federal, state and city/county income taxes.

Self-employment income calculation is another method to pay estimated taxes.  Calculate how much you earned during each period and pay the correct amount of tax attributable to each period by the quarterly due date.  In theory, by the fourth estimate 1/15, you have paid all taxes for your pending tax returns.  This is a good system if you keep good tabs on your earnings.  Especially favorable if you have a sharp upswing in income [like winning the lottery] or favorable if you can only afford to pay as little as possible based on declining actual business results.

Estimates by their very nature are rarely 100% perfect. Before I leave this discussion on tax estimates, please realize how important they are:  the penalty usually starts at 10% plus interest on the entire amount of owed taxes, often back dated pro rata to each month the partial amount of the estimate was due.  So the penalties for missing estimates can be rather high.  Also, always pay the 4th estimate to  your home state in December, not in January [in January on or before January 15th] as not to lose the current year itemized state income tax payment deduction on schedule A of your form 1040.  If you don’t know what that means, be sure you are using a CPA when you file your taxes. 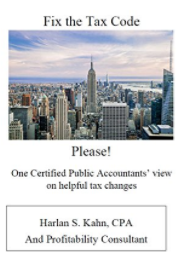 On sale now and get a free preview at Amazon Books.

Please feel free to contact us with any questions or comments you may have – we would love to hear from you. We pride ourselves on being proactive and responsive to our clients’ emails and phone calls.